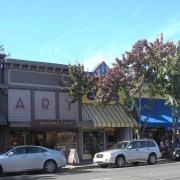 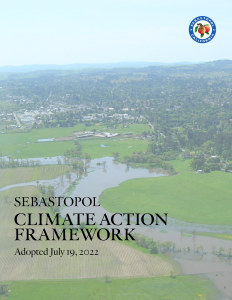 On July 19th, 2022, the Sebastopol City Council unanimously adopted the Sebastopol Climate Action Framework, a document that will guide the City as it works to address the climate emergency. The Climate Action Framework provides Sebastopol with the next steps towards reaching the goals of the Climate Emergency Resolution adopted in 2019, which included a goal of reducing emissions to net zero by 2030, sequestering additional carbon from the atmosphere, preparing for current and future climate impacts, and centering equity and community engagement in the City’s ongoing climate actions.

Sebastopol’s CivicSpark Fellow, Phoebe Goulden, led the development of the Sebastopol Climate Action Framework beginning in Fall 2021 and worked closely with the Sebastopol Climate Action Committee, Sebastopol Planning Department staff, and the Regional Climate Protection Authority (RCPA) to assemble the plan. The Framework development process included comprehensive community engagement activities to understand better the concerns and priorities of Sebastopol community members in relation to climate change. These engagement activities included presentations to community-based organizations, holding a community workshop, soliciting input through a resident survey, and tabling at community events. This outreach was guided by a Community Engagement Strategy that was adopted in December 2021 to ensure that vulnerable populations were included throughout the effort.

Figure 1. Framework development process. More detail on the engagement process is available in Appendix C of the Framework.

What is the Climate Action Framework?

The Sebastopol Climate Action Framework is a key tool to aid the City and its residents in addressing the climate emergency. The Framework provides an overview of Sebastopol’s climate progress so far and sets community-driven goals for additional action in six areas: Transportation, Sustainable Land Use, Buildings and Clean Energy, Consumption and Waste, Community, and City Operations and Leadership.

Unlike a “climate action plan”, the Framework does not include specific actions that Sebastopol will take and is not certified under the California Environmental Quality Act (CEQA). The City of Petaluma adopted a similar approach in developing its Climate Emergency Framework in January 2021.

RCPA was a key partner in the development of Sebastopol’s Climate Action Framework, hosting CivicSpark Fellow Phoebe Goulden in its Santa Rosa office for the 11-month CivicSpark service year. The Framework shares many of the goals of RCPA’s Sonoma Climate Mobilization Strategy, which was an important reference document throughout the Framework’s development. The four major areas of the Mobilization Strategy are Decarbonization, Carbon Sequestration and Ecosystem Services, Resilience and Adaptation, and Equity and Community Engagement. To better integrate Sebastopol’s goals with regional efforts, in Appendix A of the Framework: Actions for Future Consideration, each potential action is matched to one of the Climate Mobilization Strategy initiative areas. \

The Framework does not commit the City of Sebastopol to specific climate actions but instead provides the process and principles by which to evaluate potential actions. Therefore, an important next step is to determine priority actions for the City to take on moving forward. An initial list of actions that could help Sebastopol achieve the Framework’s goals is included in Appendix A of the Framework: Actions for Future Consideration. Over the next few months, Sebastopol’s Climate Action Committee (CAC) will evaluate and prioritize emission-reduction and preparedness strategies, including those in Appendix A. The CAC’s recommendations will be brought to the Sebastopol City Council for approval and appropriation of funds.

The Framework also recognizes the need for continued regional collaboration to address cross-jurisdictional topics such as county traffic patterns, emissions from the consumption of goods and services, watershed-level issues that cut across city boundaries, and more. As the regional organization dedicated to climate efforts, RCPA will continue to facilitate this collaboration through its jurisdictional members, agency partners, citizen involvement committees, and coordinated work with the Sonoma County Transportation Authority. As part of this broader effort, the Sebastopol Climate Action Framework will allow the City, its residents, and its local community-based organizations to be leaders in combating climate change both within the city boundaries and across the entire county. 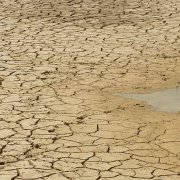 Despite a significant rainstorm in late 2021, the drought situation facing the American West is being classified as a “megadrought” and exhibits the driest conditions in at least 1,200 years, according to a new study published in Nature of Climate Change. [1]  Human-caused climate change is a key factor causing the dry conditions, which threaten to worsen going forward.

The impacts of this continuing megadrought on the North Bay will be low reservoirs, water shortages, increased extreme heat events, and wildfire threats due to dry vegetation.
Researchers have known that before human industry, yearly water levels varied. That variability, however, has been intensified by the climate crisis. “According to their findings, soil moisture deficits doubled in the last 22 years compared with levels in the 1900s. Human-caused warming accounted for a 42 percent increase in severity,” reports The Guardian in a recent article. [2] The new research is considered by many to be a call-to-arms to protect water supplies through water efficiency.

Rather than accepting a warming future with less rainfall, Sonoma County residents have tools and tactics available to reduce their own water use, to ensure existing water supplies are used efficiently.

BayREN’s Water Upgrades Save program helps Sonoma County residents install water and energy-efficient upgrades — like high-efficiency toilets, showerheads, and aerators. Not only do these upgrades save water, they also lower water utility bills for renters and homeowners. This program is currently available in the City of Sebastopol, and soon in the City of Cloverdale. To learn more, visit: www.bayren.org/waterupgradessave

The Sonoma-Marin Saving Water Partnership also offers a range of water efficiency resources to assist residents and businesses, including its Saving Water Challenge, which features 31 water-saving tips and a drawing for prizes such as a high-efficiency clothes washer and Smart Home Water Monitor. To learn more, visit: www.savingwaterpartnership.org/challenge/

As California enters a third year of drought, Bay Area communities are mobilizing to reduce water use.

In the City of Sebastopol that includes joining to help its residents save water and lower their utility bills.

“Sebastopol had the foresight to be the first Bay Area city to enroll in this program, before the drought was declared,” said Vice Mayor Sarah Glade Gurney, noting the City’s January 2021 decision, which enables its water customers to install water efficiency upgrades with little-to-no upfront cost using an on-bill charge that is significantly lower than the estimated savings — so they begin saving right away.

In early May, as Sebastopol launched its Water Upgrades $ave service, Governor Newsom expanded his state of emergency drought proclamation to 41 of the state’s 58 counties. The action came as two years of below normal precipitation, super dry soils, and historically low reservoirs threaten local water supplies.

According to the U.S. Drought Monitor, Bay Area drought conditions will persist at least through August 31 and six of nine Bay Area counties include areas of exceptional drought, with effects such as widespread water shortages or restrictions, exceptional and widespread crop/pasture losses, and shortages of water in reservoirs, streams, and wells creating water emergencies.

The drought is already being felt in the North Bay agricultural industry where grape growers are pruning vines to reduce water need, dairies are selling stock and importing water for remaining animals, and farmers are focusing on crops that need less water, according to The Press Democrat.

In response, Bay Area jurisdictions and water suppliers are declaring drought emergencies and setting voluntary, and in some cases mandatory, 10 to 20 percent water use restrictions as well as expanding water conservation programs.

These efforts will soon get help from a $5.1 billion drought infrastructure, preparedness, and response campaign included in Governor Newsom’s California Comeback Plan, which is expected to be adopted by the State legislature in June.

Even as drought pressures grow, Water Upgrades $ave can help water utilities meet emergency and long-term conservation targets by investing in indoor and outdoor customer-side upgrades using a turnkey service that provides utility capital and installs upgrades for participating customers, who use a portion of their savings to repay the project cost over time with the on-bill charge.

The new regional program is based on three pilots in the Town of Windsor, City of Hayward, and East Bay Municipal Utilities District, which were conducted by the Sonoma County Regional Climate Protection Authority, which serves as Water Upgrades $ave program manager. Serving both homeowners and renters, the pilots delivered an annual average utility bill savings of 20 percent for single family and 30 percent for multifamily projects.

Commenting on the City of Sebastopol’s interest in the program, Vice Mayor Gurney said that while “the Water Upgrades $ave program will benefit local governments by buffering the impact of our rate increase, it will also help our local citizens by giving them an affordable tool to lower their water and energy use.”